About Me:
Currently, I am the editor at Innsmouth Free Press. I publish speculative fiction and non-fiction (I'm a Templar historian). My specfic frequently crosses over into the mystery genre, as with the mystery SF novel I published with cowriter Judith Doloughan, "Fraterfamilias", which has been reissued in print and you can preorder here: http://www.innsmouthfreepress.com/?p=9379. It ships starting December 6.

I Am A:
Reader, Writer, Librarian, Editor, Critic

Quiet architect Paul Farrell, wanted for four murders in Paris, escapes to New York with two Interpol agents on his trail. Everything seems wrapped up once Farrell walks off a plane at JFK and into a hail of police gunfire. Then Farrell's eccentric brother, palaeoanthropologist Alan Kedward, steals the body, putting Interpol and an NYPD homicide detective with secrets of his own back on the case.

Now, a sinister figure called the Inquisitor with ancient secrets of his own has taken an interest in Kedward. But Farrell is still dead--isn't he?

You can find out more about ordering Fraterfamilias here. 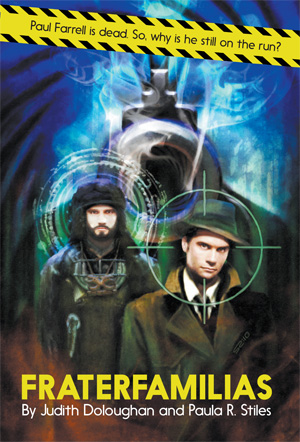 Fraterfamilias is back in print, in paperback and ebook form, and we're doing an early bird promotion for it. If you order before December 15 (Print books ship starting December 6), you can get either format for 40% off the cover price. For more information, go here: http://www.innsmouthfreepress.com/?p=9379

Fraterfamilias is currently ranked fourth on Fictionwise in the Mystery/Crime category. If you buy the book off Fictionwise, please give it a rating, as well. Thanks.

And many thanks to those who have already bought the book. I hope you enjoy it.

Many apologies for neglecting this page for the past week or so. I will try to reply to everyone's messages as soon as I can, before there get to be too many!

Fraterfamilias is now available on Fictionwise.


Also, it has been reviewed positively by GUD (Greatest Uncommon Denominator).

I've got a new interview up on Carol Ann Erhardt's blog "Inside the Writer's Mind":

Though she's a romance writer, she does interview writers from other genres. Please contact her directly if you want to do an interview with her, but keep in mind that she has a waiting list.

I also have a… Continue

Paula R. Stiles said…
ROTFL! Thanks, Linton. It's sort of a private joke. I worked at a zoo a while back that had a grown-up litter of snow leopards. The female in the group was a real character. Had a *very* dry sense of humor.

Larry W. Chavis said…
Paula,
Happy New Year, and all the best in your writing in 2008.

Krystal Waters said…
Wow, you just never know from one minute to the next! I have been published! Three years working on my novel, polishing, revising, reworking, networking... TENACITY! I just wanted to give you the great news!
Kristine

Kelli Stanley said…
Vale, Paula, and thanks for the invite!

The story of Fraterfamilias sounds fascinating, and so does your background as a Templar historian! We like many of the same authors, and of course, I give your Latin title two *big* thumbs up!

I'm very sorry about your writing partner, Judith. At least she was able to see your joint work published. The fact that you're carrying on what she started is wonderful. Thanks again, and take care!

Krystal Waters said…
Hi Paula! I just love your photo and seem to find myself coming over to your page just to take a better look at the tiger. How has the summer been going for you? Oh yeah, I am going out to Barnes and Nobles to get your book. Looking forward to read it!

Cormac Brown said…
Hello Paula. Thank you for the invite and condolences to Judith's family and you.

I went to Africa in '91 for two years. Can't say I regret it, on balance. But it did change the direction my life went in quite a bit.

Paula R. Stiles said…
Thanks for the condolences, Camilla. I wish she could have lived to see some of the reviews, but at least she was able to finish some more stuff before she went.