The second stop on my book tour of South Wales on the publication in the UK of the tenth in the DI Andy Horton crime series, Death Surge,was at Pontarddulais, a town situated just under ten miles to the north west of…

My recent book tour of talks in South Wales on the publication in the UK of the tenth in the DI Andy Horton crime series, Death Surge, kicked off in Abertridwr Library. Abertridwr is a village in the borough of Caerphilly, Wales in the Aber Valley. The English translation is…

CSI Basingstoke, where crime fiction met crime fact, held on Saturday 6 July at the Basingstoke Discovery Centre in Hampshire, England, was a big hit with the audience. The sell out event was attended by a capacity audience of fifty crime fiction and CSI fans.

The event was modelled on the highly successful CSI Portsmouth, which I first organised in 2010. This year will be the fourth year of CSI Portsmouth,…

Video Interview with Pauline Rowson - Bringing in the Baddie

I've uploaded a new video here to my You Tube Channel. In this video interview I'm talking to Tony Smith about bringing in the baddie.

There are lots more interviews on my …

CrimeFest 13 was buzzing. It was great to catch up with some of my fellow crime writers, meet lots of lovely crime fiction fans and meet up with my publisher, Severn House.

The panel session on Friday morning was well received by a lively audience and my In the Spotlight Session later the same morning where I talked about "The Perfect System for Writing a Crime Novel" was standing room only.… 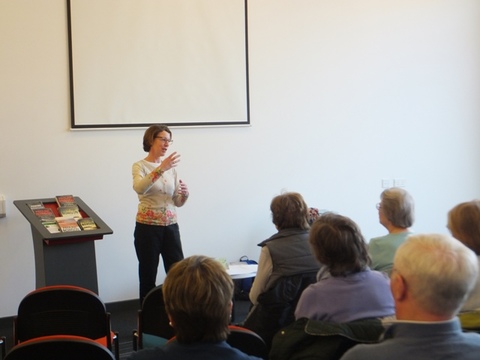