my apologies for the frailty of flesh

There are times in your life that things are so bad all the cliches actually start making sense. Spinning out of control. Don't know which end is up. Emotional roller coaster.


And when you're there, the only thing you seem to know with certainty is just how messed up everything is.


Right now, I'm displaced. Sort of homeless, and I feel overwhelmed by the awareness that I don't have an anchor. I'm sitting here, listening to…

Yesterday, after months of preparation, I played host for Pennwriters’ Firearms 101 for Writers Workshop. The workshop was a joint effort between Pennwriters’ Area 3, of which I am the representative, and Area 1, which is represented by Catherine McLean. Catherine took care of all the sweet treats and hot beverages, budgeting and registration. I took care of the presenters, lunch orders, and bottled… Continue

What is the difference between picking up a book and picking up an experience? I read a lot, and sometimes it's just going through the motions. I read the book because I've met the author or because it's lying there on my bedside table and I'm not willing to get up and go look for something else. The plot doesn't grab me, the characters are bland or even objectionable, and the writing style makes me skip ahead at times to find something happening.

Leslie Budewitz on The Graveyard Shift

Today, The Graveyard Shift welcomes attorney/author Leslie Budewitz as our featured guest. Leslie is discussing Presumption of Innocence and Reasonable Doubt. She will also be on hand to answer your questions. Please stop by.

The Borders Books at the Dulles Town Center is starting to feel like home. I had a fine signing there and as I was packing up they were ordering more books and signed me up to return next month. It is a joy to have the support of a local bookstore and if any of you lives anywhere near the place, make a point of stopping in and checking out the "local author" section.

The other great news this week was a new review. This one was from Cathleen Mitchell, a fellow northern Virginia… Continue 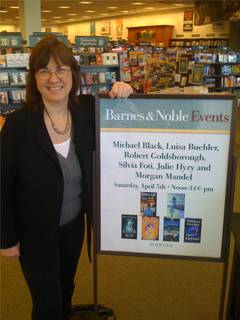 Recently posted my published novels over at my Web site. All four of 'em are up there in their entirety in both HTML and PDF. One of these days I'll upload blurbs and cover copy.

'A Study in Red - The Secret Journal of Jack the Ripper' has received a nomination for 'The Author's Lounge May 2008 Best Cover Art Award'. The cover was designed by Deron Douglas at Double Dragon Publishing, and I'm thrilled that it has been honoured with this nomination. Voting opens on May 1st, at which time I will be listing the voting links in hopes that one or two of my friends might feel kindly disposed enough to cast a vote for the book.…
Continue

A Sunny Saturday by Margot Justes

I had plans today, after all I had a free weekend with no commitments, I need to write and actually try to finish book two, I have e-mails to answer, marketing to do- ohhh- wait, and a blog to write. I had plans to do all of that and more.

But, then I looked out the window, the sun was shining, so, I opened the said window, and the birds were chirping. And I called my friend and said I need shoes, want go shopping, my friend after a few minutes of hesitation, said sure, I’ll pick you… Continue

Listen to the Blogcast

At the recent mystery conference, Left Coast Crime, I moderated a panel entitled, “What’s My Niche? Cozies With a Theme.” As the author of the Josie Prescott Antiques Mysteries, that topic is right up my alley.

My panel was intended…

Laura Lippman and the Invisible Woman

Last night I attended a booksigning for one of my very favorite authors, Laura Lippman. For a report on the evening and pictures, check out Writing, etc.

A Short but Telling Review

This short but very telling review has been placed on the Amazon.co.uk website page of 'A Study in Red' by someone who has obviouly really enjoyed ny latest nvoel. How wonderful to see his words there, as after all, the customer is the only real critic that matters where book sales are concerned. This reader gave the book a five star rating!

A cracking read, keeps you on the edge of your seet… Continue

My wife and I recently rented a movie entitled Rendition. It told the fictional story of an Egyptian born American citizen who was unjustly accused of being a terrorist and shipped off to a prison overseas where he was subsequently subjected to various means of torture including waterboarding, electric shock and beatings.

Last Sunday night, in a case of life imitating art, 60 Minutes told the story of Murat Kurnaz, a German citizen, who was picked up on a bus in Pakistan three months… Continue

The suspenseful wisdom according to Patricia Highsmith

Years back, I read Patricia Highsmith’s book on how to write suspense thrillers. She being one of my biggest influences, I actually annotated the text, printed out my notes and stuck them on the fridge. Figured some of my more criminally inclined blog buddies might get something out of it, so I decided to share the highlights that I pulled from the book:

A protagonist reveals his or her character by what he does. Action is character! Meet me in Virginia!

Tomorrow I'll return to Borders Books at Dulles Town Center for another afternoon of book signing fun. Manager Leigh invites me back frequently and each time people who bought one of my books at an earlier signing return to pick up the next one. Great people make a great store and this one's pretty high on my list.

If you're anywhere near 21100 Dulles Town Circle, Dulles VA Saturday, stop by between noon and 4 pm and say hi.

What Edison Said: the Sweating Thing

You know, 10% inspiration and 90% perspiration. What is lacking in the masses of wannabe writers is willingness to work on their work. You can't write it and say you're done. You can't edit it once and say it's ready. You can't publish it and wait for fame and fortune to drop into your lap. And that's sometimes hard to comprehend, even off-putting.

Writing is becoming tougher as it becomes easier. The computer facilitates writing, and any goof with spellcheck can play author, so it's… Continue

Questions and Answers from Readers and Fans

Q: "I was trying to do a search for sex offenders in my neighborhood, (since i have a young nephew that lives down the block) and where do they reside? I cannot locate a site this provides this information without paying for it? I thought this kind of information was privy to everyone?"

A: Megan's Law, enacted by Congress a few years ago, gives everyone access to sex offender information. In Illinois, the Sex Offender Registry is maintained by the state police… Continue

Hi Everybody! Thanks for the great welcome!