“So?” Tabitha said as soon as she walked into the living room the next morning.

Preston shrugged. “So nothing. We talked a lot is all.”

“Oh Pres what am I going to do with you? I bet you didn’t say a word about your feelings. And before you say it’s too early to remember that you’ve known him a lot longer than you have me. He’d have to be a fool not to know on some level what you feel even if he won’t admit it to himself.”

“Tabby, damn it, he’s in a relationship… Continue

I pinched this idea from recent articles in the Guardian where a number of writers are penning their ten rules for writing. I thought I'd add mine.


1 Always have a pencil and paper with you, in every handbag, shopping bag or pocket.


2. Travel by public transport, you see and meet some great characters for novels.

Come over and take a 'peek.' 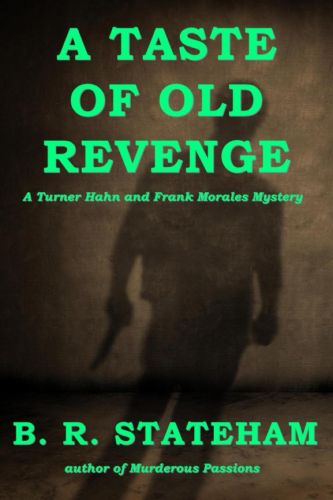 The first three chapters of 'A Taste of Old Revenge' is over on my blogspot at http://www.noirtaketurner-frank.blogspot.com

Shadow Line Press is bringing the book out in August. But come over and read the three chapters. Make a comment. Either way. Doesn't matter, we'll still be friends (well, at least on talking…

Detective Sergeant Trevor Haken was one of the infamous Golden Mile's most crooked cops. Now he lives in hiding, in a hell of his own creation.

Graduating from small bribes to stealing money and receiving kickbacks from drug dealers, Haken became an informant for the Wood Royal… Continue

I am happy that my life has moved-on from that unfathomable pain in the past. I am happy that I am with you now. As I see you walking on the corridor always wearing your formal dresses, it feels like hope had touched my heart again. I dedicate this to you, for even though you cannot read this, I know fate will find a way to touch you with my words.

You’ve helped me in times…
Continue

Let me start off by saying I'm now a fan of Vincent!

I loved this book for so many reasons but I'll start with the main character Moonlight. He was such a well
built character that no matter what dastardly deed he did in the story,
I found myself still rooting for… Continue

When Characters Take Over

Guest blogger Robin Cain talks about dealing with her independent fictional characters today on my main blog, “Another Writer’s Life” -…

Book of A Lifetime: The King Must Die

The Independent has a regular feature in which it asks authors to write about a book which changed their lives somehow. Last week the London newspaper asked me to write the piece. Here it is:
In early 1999, King Hussein fell sick on his return from cancer treatment in the US. I was Middle East correspondent for The…
Continue

Wednesday I have to take my dog to the vet and have him put down.

Thirteen years ago, I traded my maiden name for the opportunity to bring this dog into our lives. It was June 1996, and Patrick and I were to be married in July.…

Reviewer and author Martha Cheves has given my new release 'Purple Death' a wonderful review at the site of Amazon.com I'm so pleased that people appear to be enjoying this latest mystery/thriller.

Was Israeli intelligence really behind the video showing an Abbas aide soliciting sex? (I posted this on Global Post.)
Fans of the Jamaican reggae singer Shaggy will already be familiar with the strategy of a Palestinian official caught with his pants down — actually, with his pants entirely off — in a sex scandal this week.
On his…
Continue

What it takes to write your way to the top

Yesterday I saw Fame the musical performed by STP Musicals at Fareham’s Ferneham Hall, Hampshire. I’m a great fan of musicals and being a former dancer I also adore the dance scenes. But the reason for me going to see Fame this time round had more to do with my niece appearing in the production than a desire to see the musical for itself. What struck me though, while watching this highly professional performance, was that although I’d seen the film of…

I'm thrilled to announce that my short story "Death Will Trim Your Tree" is one of this year's Agatha award nominees. You can read it at http://www.elizabethzelvin.com/PDF/Zelvin, Death Will TrimYour Tree PDF.pdf .
In a way, I owe it all to CrimeSpace. I'd never written a short story (well, not since college 100 years ago) when Daniel Hatadi announced a short story contest here with… Continue

This is wrong in so many ways I don't know where to start.

A year ago Mysterious Reviews was kind enough to read and review Murderous Passions. I got a three-star out of a five-star review. Good enough for the first effort on a beginning series. But somehow I didn't convey to them it was a first of a series. Secondly, you could tell in the review it was a fast read because of a couple of minor errors made. So . . . a year later I re-read the review and I begin to wonder just how effective reviews are to the reading…

“Where the hell have you been,” Hugh asked angrily as Cary walked into their living room. “Do you know what time it is?”

“I’ve been with a client. I told you that when I called.”

“No, you said you were working late.” Stalking towards Cary Hugh thrust him back against the door, saying with a sneer, “Did you have fun with this ‘client’?”

“God Hugh, get a grip. It was work. Do you think I like doing that when I could be home with you?” He tried to squirm loose from… Continue