Many who know me know that speaking is not a favorite activity. But oddly enough, I do enjoy teaching. What's the difference? Preparation and subject matter. This past LIM was the first time I began speaking about my writing. I am long accustomed to doing presentations about being a young adult librarian. People always want to know how to attract teens to libraries. and what to do with them once teens come in to the library! But a big crowd still freaks me out.

I was a guest lecturer… Continue

STAGES OF WRITING A NOVEL

The steps below help me to keep on track when writing a novel. Through trial and error, I've come up with these ideas to stay organized.

Get idea. Get excited about idea. Start outlining, mental planning--whatever you do to get going. I always just dive into the writing.

Open a second document on your computer. I name mine [NAME OF BOOK] NOTES.DOC. Keep it open whenever you're working on this manuscript. In it note each new character's name and description as you write… Continue

I Killed a Bank Robber - a true story

Hi Guys. Today, on The Graveyard Shift I'm doing something a little different. I'm telling the story of the day I shot and killed a bank robber during a pretty intense gun battle. Not only did I write about the shooting, I've shared a small portion of what happens to tough guy cops after they've taken someone's life. If you have a moment, please stop by. As usual, I have a couple real-life photos of that day.

It's an old quote from Shakespeare: "Brevity is the soul of wit". Oral communication in today's world, which is nonstop unless you're fast asleep, requires capturing the listener's attention and then communicating quickly. Most people aren't used to listening for more than a few minutes at a time.

I won't argue whether that's good or bad, but when we hear of sermons that once lasted three hours and piano concerts that started with nine mazurkas as an introduction, we understand the… Continue

Burl Barer, Edgar Award winner, teams up with famous attorney Don Woldman for a live hour of mystery mayhem, controversy and true crime -- with special guests from the world of crime and mystery literature!! 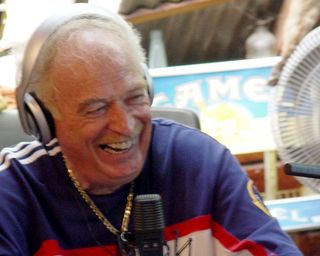 If you can see that picture, it is of Don Woldman. This week, March 22nd, our guests are Private Eye Fred Wolfson, investigative journalist Steven Long, and author Suzy Spencer who is doing a new survey on SEX IN… Continue As I read posts and talk with writers, I find striking similarities in the need for outside affirmation. We all write because we're driven to write, but there is beyond that a step that we cannot take by ourselves. In order to be comfortable with calling ourselves writers, we have to be accepted by Others, be it agents, editors, or readers. Just writing isn't enough, at least not for long.

When I started writing, it was for myself. I wanted to tell a story, not an important one, but… Continue

If you want a breezy read and insider's look into the agenting process, check out Debra Ginsberg's BLIND SUBMISSION. It's a novel about young woman's baptism into the fire of a high-profile literary agency. I met Debra this weekend at an author's event--I didn't realize that I had actually had read about her and her book until later. Highly recommended for folks curious about what agents do all day.

Introduction to my life as a crime editor

This is an introductory post starting this blog. I love the idea of CrimeSpace, of having an international, blog-based community to share our thoughts and love for crime fiction. Thus I joined. Having said that, I won't have much time ... you are likely to find here once-in-a-while posts relating to my professional life mostly. And perhaps rants about the German crime scene ;-).

This is what made my life hell put bread on my table since January 1st:

This is no musical

Willie Robertson, Jr. is about to become the first African-American President of the United States of America. The votes have been tallied and the results are in-he wins in a landslide victory over his opponent and all the non-stop mud slinging. But suddenly a grisly discovery is made: corpses are found in the Lincoln Bedroom of the White House. The President is handcuffed and arrested in the Oval Office during a National televised speech. Derrick Sweat, must seek the truth, One or another. The… Continue

Spring is on the way, supposedly, although I’ve just heard the weather forecast here in the UK and the weathermen are talking about icy showers and maybe even snow! I haven’t seen any new born lambs as yet, but I think our local farmer has them on high ground at the moment – so maybe we’ll get to see them gambolling about in the fields pretty soon.

I had a great weekend with family. We went out for a huge family meal and celebrated… Continue

I read in the paper today that John Stumpf, the CEO for Wells Fargo & Co., received over $12 million in compensation last year while the total return for shareholders in his company was down over 12%. If my math is correct, that means that Stumpf collected $1 million for every 1% the company stock lost in value.

The former Bear Stearns CEO, James Cayne, collected $40 million in compensation in 2006 while his company and shareholders… Continue

Book Event and a Book Offer You Can't Refuse

I spent a pleasant couple of hours on Saturday in the company of some stellar crime writers. First of all I had lunch with Duane Swierczynski (who has learned some very interesting Scottish words) and Russel McLean (who already knew them). We discussed books, travelling, and whether you can have more fun at an Edinburgh wedding or a Glasgow stabbing (I've been to both - my vote goes to the Glasgow stabbing). From my point of view it was fun. Not sure what THEY thought. We then went off to see a… Continue

I've become more aware of how writers write as I hone my own writing, and one thing I notice that we (yes, me too) do is put too much of ourselves into a work. As a teacher, I want to teach, so I have to guard against putting lessons on Scottish history into the middle of an otherwise swiftly-moving story.

Now that I've admitted my own fault, I notice that it happens to other writers as well, some much more famous than I. Sometimes it's just the irresistible urge to put in a factoid… Continue

Medusa, the fourth installment of the Roland Longville series, is in the can, after one last final edit. It's the sequel to the second novel, Magician, which has so far proven to be my own personal "best-seller." Magician has generated more kind emails and other feedback from fans than anything else I've done, so I was very nervous about writing this sequel, although I had deliberately left the ending open for just such a follow-up. I was nagged by the…

In the wake of the Daily Telegraph list of must-read crime/thriller authors, The Rap Sheet decided to create their own. I was looking at the discussion about it and came back to the same question I've pondered…

I'm working on a magazine article, which is a bit different from my usual writing. I've done a couple of them, for a couple of reasons. One is it's a challenge to do something that doesn't allow me to veer from the truth, and the other is that it gets my name in places where people will see it. This article is called "Macbeth & MACBETH: Where Is Truth?"

I chose in MACBETH'S NIECE to ignore reality and go with Shakespeare's depiction of Macbeth, but I felt a little guilty about… Continue

The Pursuit of Excellence

Sixteen years ago I set out to become a published novelist. During that year I took it upon myself to outline and write my very first book. After finishing the first draft I went through and re-wrote it before holding my breath and handing it to a few trusted readers. One reader, especially, who happened to be a professional proofreader, gave me lots (and lots) to think about. I re-wrote the book again. And again. And again.

After re-writing it a dozen times I began the agent search.… Continue