Paying for It by Tony Black. Out July 17 Hope all is well for you and yours.

For those of you who missed my TV interview on the Biography Channel's Crime Stories, here's a chance to catch the rebroadcast at the end of this week as follows:

Crime Stories: The Love Slave Murders
Gerald Gallego, son of a convicted killer, and Charlene Gallego, honor student and musical prodigy, were a match made in hell. Preying… Continue

Another Great Place for a Good Book

Goodreads is a social web site designed to make reading fun. There are lots of book recommendation websites out there that list random people’s reviews. On Goodreads, when a person adds a book to the site, all their friends can see what they thought of it. The theory is, people are more likely to get excited about a book their friend recommends than a suggestion from a stranger.

Save Us from Info Dump

Once again, I"m stuck in a book where the author thinks I care how much research she did. It's a mystery, but we keep stopping to reflect on the history of certain famous buildings, the eccentricities of certain famous people, and the operating processes of certain organizations. Any one of those things might be interesting except for two things. First, they have nothing to do with the story, and second, they're so obviously pasted on that it's like being hit in the face with a wet… Continue

I Wish They Hadn't Made It

Man, I was looking forward to the new Indiana Jones movie. The second one in the series was sort of so so but I loved the first, all two dozen times I've watched it, and the third was pretty darn good,too.

Spielberg and Lucas should have left the franchise alone. Either that or when Harrison Ford saw the first rushes of Crystal Skull, he should have used his whip to tear them into tiny fragments flushed them down the nearest toilet.

Seriously. It's that bad. So bad, in… Continue 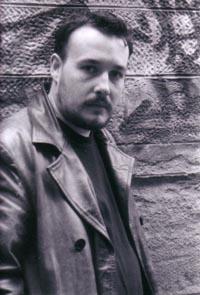 Listen in as Russel spills about Crime Scene Scotland (the original and Crime Scene Scotland Review), his love of hand-selling books and his upcoming debut novel, THE GOOD SON (coming this Fall from Five Leaves). He also gives practical sporran advice for the… Continue

And about those book fairs...

The worst part of attending book fairs is that sometimes other authors forget why I’m there. They come to my table when I’m trying to interact with potential readers and stand there and talk to me about THEIR books. Some of these guys get lost in their chatter, looking me right in the eye not realizing that I’m already visualizing the duct tape over their mouth.

To Blog or not to blog

I have a dear friend who still uses snail mail, sending me multiple page letters written in long hand. She writes faithfully every month or so and has for more than thirty years. I suppose our fascination with blogging is somehow tied to our desire to communicate. We don't take (or have) time to converse with one another. There is rarely an opportunity to thoughtfully discuss ideas and exchange views. So we blog.

Logic in a Changing Time

The interesting thing about discrimination is that it can’t prevent inevitable change. Puritans established a new home in North America, an Irish Catholic became president, African-Americans got the vote.

As with any business, it is always about the money. The bottom line rules. It doesn’t take much research to see how often advances do not earn out and how many books go unsold. Publishers will save millions if they stop paying advances and discontinue the practice of printing books… Continue

Is Blogging a Time Sink?

Well, yes, in some ways. I find that it takes me at least an hour each morning to read my email and write the blog. Is that a bad thing? I don't know.

What I get from blogging is hard to define. Of course I get responses sometimes, and that's fun because I get to "know" people who react to a topic I've chosen. But the real benefit is more personal, and I can only liken it to the journal-keeping of earlier centuries. Many, many people kept journals in the days before computers, and… Continue

Hi there! This is the inaugural edition of my weekly blog. It will appear on my web site, www.stevenhague.com, every Monday, and its humble role in life is to keep you up to date with what I’ve been up to for the last seven days. Any comments would be much appreciated – it would be nice to know that there’s someone else reading this!

Firstly, I hope you’re enjoying my website, which I’ve been working on for the last few weeks with web designer Christine Woods. I’ve known Chris and… Continue


Listen in as Steven talks about his Precinct Puerto Rico series (see, Steven...I got it right!) and his latest effort,… Continue

There are quite a few stories about Bo Fexler, though you shouldn't believe all you read.

If you don't know her, you should. She's the sort of woman that will bring you to your knees. If you're good, she's do it with her mouth. If your bad, she'll do it with her fists. Or maybe it's the other way around. ;-)

She's good to have on your side. It's kind of like being on the right side of a gun.

She's been skukling around for a while, taking in the scenery. She… Continue

...why I quit writing that damned book. I hauled it out yesterday and read it over, especially the last three or four chapters. I got to the end of Chapter 19, and that's all I had written back when I was working on it regularly. As I read it again, I realized I had absolutely no idea where to go from there. I guess I thought that letting it sit and percolate for, oh, three years would be a good thing. HA! I actually want to work on it again and I'm just clueless. Looking back on when I was… Continue

There is now just one week left for voting in the Authors Lounge Cover Art Design Awards, May 2008.

I'm flattered that the cover of my novel 'A Study in Red - The Secret Journal of ~Jack the Ripper' received a nomination for the award, and wondered if I might ask my friends if they feel so inclined, to place a vote for my book on the voting page at http://www.talauthors.com/TAL/RomanceandMoreAwards.htm

I'm still working on the Independent Mystery Booksellers Association's top 100 mysteries of the 20th century, and this book came up. Good book. I gave it three out of five stars over at my LibraryThing account.

One thing I didn't dig about the book was the violence. It seemed the heroes were doing so much killing, it felt like an eighties Arnold… Continue

Of Book Fairs and Podcasts

That most recent fair was the Philadelphia Book Festival. Saturday was a good book signing day, despite the pollen that had me sneezing thru an itchy nose all day. Sunday brought a downpour that caused us to leave a bit early. But the trip was super anyway, because my lovely wife Dee and I got to spend some time with my frat brother Marc and his charming wife Pat. They were perfect hosts so even though Philly wasn’t the perfect book signing opportunity, we’ll be looking for an excuse to… Continue 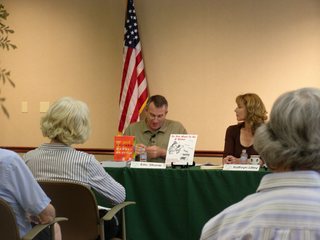