In a wildly dangerous experiment, this Sunday evening "The Book, With Earl Merkel" will break into our usually pre-recorded programming --in mid-show-- for a "LIVE, on-air listener call-in" chapter-segment...

... where YOU can call in to introduce yourselves --and to interrogate, with waterboarding intensity-- Mary Cummings, the head of the fast-growing publishing house Diversion Books (New York).

In an era where many publishing houses are cutting back, Ms. Cummings' house…

Your chance to chat with me

Beginning August 5, 2013 through August 14, 2013—I will begin what I call Skype chats. I’m setting aside two hours a day for seven days to chat with people about my true crime, Killer Nurse.

A schedule of the chat times is below. I will set aside 10 minute time slots for everyone who wants to participate. You will have ten minutes of one-on-one time to talk to me and ask questions.

This may sound difficult and or expensive, but it is actually neither.…

More indebtedness incurred by author Earl Merkel, rapidly becoming known as "the Greece of the Writing World"-- this from the lovely Lis Wiehl, who writes the "Triple Threat Club" mystery series when she's not doing legal analysis on television:

"If you're at loose ends waiting for Showtime's HOMELAND to return next fall FIRE OF THE PROPHET by Earl Merkel is your salvation. It's…

Wanna Read YOUR Stuff, On-Air? Our ‘Limits’ Are Flexible…

Re: those “audio essays” I’m asking you Faithful Readers/listeners of

to send me for airing on "The Book, With Earl Merkel": this comment to Lori Hays, in response to my parallel request to other AOTA hosts for short…

Attention, Vince Flynn fans --or Neil Gaiman fans, since he's featured there too this week-- Sunday night's episode of "The Book, With Earl Merkel" is now available on the radio archives.

Hearing both these outstanding writers discuss their lives & their works is, IMHO, well-worth the "click" on the link below.

Show Synopsis: After a month's-long "foreshadowing" --okay; sure, it's a hoary writing tactic,…

Up this morning in Kings River Life Magazine a review & giveaway of Carolyn Hart's latest Death On Demand Mystery "Dead, White and Blue" and a fun interview with Carolyn about the series http://kingsriverlife.com/06/22/dead-white-and-blue-a-death-on-demand-mystery-by-carolyn-hart/

Also this morning a review and giveaway of "Gray Dawn", the latest mystery from Clea…

BEFORE HE KILLS AGAIN, New Thriller by R. Barri Flowers THE PICKAXE KILLERS by R. Barri Flowers Now in Audio 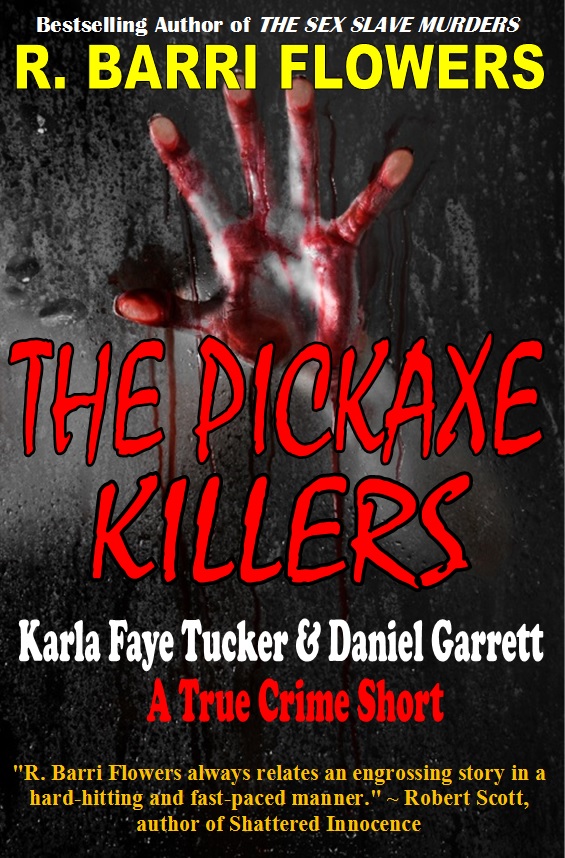 Having written about hundreds of notable murders in his bestselling true crime book, MURDERS IN THE UNITED STATES: Crimes,…

So this is exciting. My Grace deHaviland Bounty Hunter short story FATAL TRYST is featured new this week as a free podcast on CrimeCityCentral.com, the Audio Crime Fiction Magazine.

Here's the link, look for case no. 49
http://crimecitycentral.com/

So check it out and enjoy--and did I mention, it's free!

Saturday I’ll teach a 3-hour class on "How to Develop Your Character." This is a condensed version of the 6-hr class I've taught several times at Anne Arundel Community College. In this class I share all I’ve learned writing nine well-reviewed novels. I offer tips and techniques to develop well-rounded characters readers will care about, and explain how to get your readers to cheer your heroes, boo your villains, and worry about the people caught in the middle.

On the day Nell Letterly is supposed to meet her new employer, Arlo Callahan, and start as an instructor in his Boulder,…

Although I do astrology, I no longer ask people “What's your sign?” As an acquisitions editor for Oak Tree Press, I now ask authors, “What's your genre?”

The worst thing a writer can do is give me a blank stare. “Genre” is an essential part of the lingo in publishing lexicon. It's how we classify a book and decide if it fits our line.

Labeling books has practical reasons. Bookstores (when they existed) found it useful to put books…

I'll wager you are thinking of several bad decisions in your life and how those could be turned into a short story or a scene in a novel. You may have to change the names/locations/dates to protect the guilty (and save yourself a lawsuit) or you may have to embellish the facts a bit to make the anecdote play out a little better in written…

Where do these people come from?

Today you can learn how I came up with the characters in my latest novel AND win a prize on my blog, Another Writer’s Life http://ascamacho.blogspot.com/

And if you want to meet John Gilstrap, he’ll be interviewed during Saturday’s lunch, and teach a class, at the Creatures, Crimes & Creativity (C3) conference in Baltimore, September 13, 14 & 15. We will gather readers and writers of mystery, suspense, thriller, horror, sci-fi, fantasy, and steampunk…

Some history and some crime

I published my first book, Code of Deceit, in 2007, and I was fortunate enough to have it hit several best-seller lists. I followed that one with Journey of the Spirit—now renamed The People’s Warrior. This one, a historical fiction did fairly well. It was even voted second best in the mainstream category by readers.

Then In 2008, I published Cold Tears. This book exceeded all my expectations, and I have high ones. Voted the best mystery in the world, the sales and accolades…

Today I discuss the importance of character names on my blog, Another Writer's Life. http://ascamacho.blogspot.com .

And the classy e-magazine Grove Street just released a book club and book lover’s edition. Aside from lots of other interesting content, this issue features an interview with yours truly. Check it out.…