We all know that a doe is a deer, a FEMALE deer. Some animals have gender specific names, and if that's good for the goose then it's good for the gander. So, what do you call a male ladybug?

I didn’t know if this was going to be something I could enjoy, a mystery surrounding race horses. I know absolutely nothing about horse racing or horses in general other than the fact that they have four legs,
consume food, and it comes out the other end in large steaming piles. Fortunately
for me this novel was not a big steaming pile.


I was as shocked as anyone that I got a groove on this. I would say the reason was that Dean… 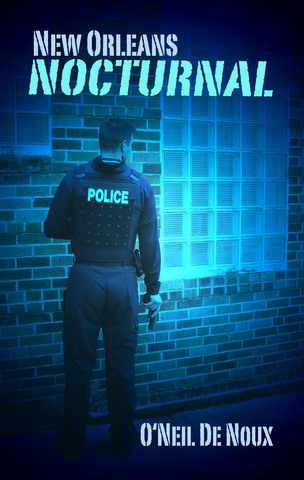 NEW ORLEANS NOCTURNAL is a series of nine short stories featuring New Orleans Police Homicide Detective John Raven Beau. Half-Cajun and Half-Sioux, Beau is a relentless pursuer, a man who will track a killer across miles of dark streets, through swamps, wastelands, over rivers and…

This last weekend held a pair of fun events in two states. The Borders Express in Montgomery Mall has been remodelled and the whole mall has changed a bit since my last visit, but the Maryland readers were welcoming as usual. My book signing at the Borders superstore in Fairfax, Virginia was even more successful. This was a first visit but you can bet I'll be back there soon. All in all, a great weekend for signing books.

A Q & A on The Suffocating Sea, the third in the Inspector Andy Horton marine mystery crime series

I did this Q & A session recently for the Chichester Book Club web site and thought Id' post it here. It's based on the third novel in the Andy Horton marine mystery crime series, The Suffocating Sea, which is available in paperback and as an unabridged audio book and e book.

How would you describe your crime novel, The Suffocating… I haven't been very public about this, but earlier this year I was diagnosed with end-stage renal disease. This meant my wife and I needed to move our lives one state over and receive a kidney from a donor. Luckily, that happened before things got really bad.

Unluckily, kidney transplants are extremely expensive. The care required after the operation is also extensive. It isn't like changing a tire. It's like changing how your entire… Continue

Blast From The Past Joseph Finder Vanished

Last Sunday, I shared with you a series of novels I thought would make you laugh and cringe at the same time. This week I have a novel for you that have recently been released in paperback, Joseph Finder’s Vanished. To
say I am a fan is an understatement. I have read all his novels and always look
forward to the next. So, if you wish, click off here, thinking I am a homer, see
you tomorrow, maybe. Me being the
Yankees fan I was raised to be, always can… Yesterday was one of those rare perfect…

Please before you come after me to explain how this fits into the category of digital shorts, it’s very simple. Carla Rene has put together a novel of short digital shorts that in total has a word count of
16,580 words. I am not going to go into each and every short she has. Instead I
am going to focus on one, the cute little diddy she put together that has the
childhood reading characters, Dick & Jane, and Jack & Jill in a race. I
like the…


I find that many things are true in this world, one of which is that I have quickly become a big fan of Zandri’s. He penned another digital short available from StoneHouse Ink- True Stories. The digital short is 4560
words of pure emotion; I was totally wiped out when I was done reading it. The
naked emotion he is able to convey in his brief narrative is nothing short of
amazing.

"THE BODY IN THE LIBRARY" CELEBRATES AGATHA CHRISTIE'S 120th BIRTHDAY

If you live in the Chicago area, you won't want to miss "The Body in the Library", a free Love is Murder preview celebrating the birthday of the grand…

Saturday is upon us and here we go again, Digital Short Saturday. Each week that I investigate this new tool authors are using to help us see into their creative process, the more I am getting sucked into the
enjoyment of it. I happened upon this digital short because I became friends of
the author on Goodreads. We exchanged messages and he said as a side note, I
have some novels written but I don’t know if they are your thing, having
checked out my…

Review: Me, Myself & Why by Mary Janice Davidson

Me, Myself and Why -- read the review at http://tinyurl.com/25zc9rd

Are you a Batman fan of any kind? I am and this is just the graphic novel for any size Batman fan: passive /aggressive or in the middle. Frank Tieri along with J. Calafiore as Penciller and Jack Purcell/ Inker make
an amazzing team (this is so good I had to use two z’s).You want villains:
Biff, Pow, Wham, you have almost all of them in these pages.


I give no spoilers but here is the synopsis from the back page: ”Gotham City may be…


I made some new friends over at Linkedin and they have been amazing finds. The latest one is Manoj Rao and his new graphic novel series WMDs The Weapons Are Coming. I love the concept. I enjoyed the plotline,
artwork, dialogue and premise. Wait, did I tell you how much I enjoyed all this?
The whole experience was another first for me, reading and experiencing a
graphic novel on an iphone , my son’s.…